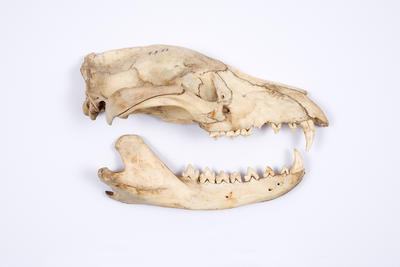 Maker
Frederic Wood Jones FRS (b.1879, d.1954)
Date
Pre 1930
Description
Right side of a sagittally bisected skull of a male Thylacine (Thylacinus cynocephalus) originally mounted on a board as part of a museum display to illustrate the concept of convergent evolution. The thylacine skull is compared with the skull of the unrelated but superficially similar Dingo (Canis dingo). The display was prepared for the 1932 exhibition 'Man and His Ancestors' by Frederic Wood Jones, University of Melbourne’s Anatomy Department Head from 1930–1937. The left half of this skull is held in the collections of the Hunterian Museum in the Royal College of Surgeons, London (object no. RCSOM/A 368.5), presented in 1951 by Wood Jones. Documentation attached to the Hunterian specimen indicates that the skull was from the collections of Robert Henry Pulleine (1869–1935), a New Zealand born physician, naturalist, and collector. It was collected (“found in an outhouse”) in Woolnorth, a region on the far north-western tip of Tasmania.
See full details