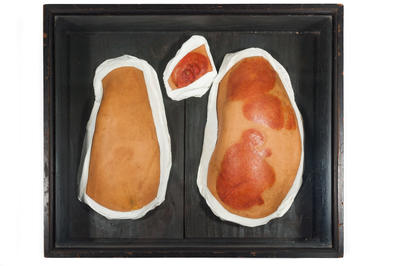 Wax moulage, lower limb before and after radium treatment

Maker
Herman Fermor Lawrence (b.1863, d.1936)
Date
Circa 1911
Description
This early 20th century wax moulage illustrates the symptoms of mycosis fungoides, the most common form of cutaneous T-cell lymphoma. It was created by Dr Herman Lawrence, the first dermatologist of Melbourne’s St. Vincent’s Hospital. In this era, a wax cast was one of the only ways to accurately document in three dimensions the external symptoms of disease. Lawrence showed this moulage at the Ninth Australasian Medical Congress held in Sydney in 1911, and illustrated it in his book of the same year, 'Radium: how and when to use'. He described the moulage as, "Mycosis Fungoides treated by X-rays and radium. Five years since tumour stage was reached but by treatment the disease has been kept in check. Disappearance of the mycotic plagues three weeks after treatment." Lawrence donated his moulages to the University of Melbourne in 1919-1920.
See full details

Wax moulage, lower limb before and after radium treatment