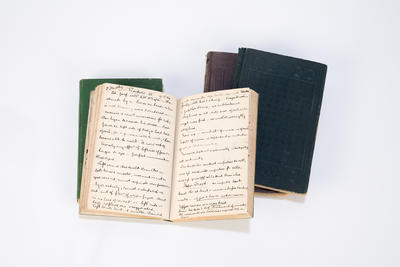 Student notes from lectures, School of Medicine, University of Melbourne

Mary De Garis (1881-1963) graduated from the University of Melbourne in 1905, and was the second woman in Victoria to gain a Doctor of Medicine, in 1907. After travelling abroad between 1908 and 1910, she was appointed to Tibooburra Hospital. Here she met Colin Thomson, and they became engaged two weeks before the outbreak of World War I.

A patriotic feminist, Mary applied to the Australian Army, but was refused. Despite this, she and about 16 Australian women doctors travelled to Britain to offer their serivces. Denied enlistment, they worked in various voluntary and paid positions, often with Allied governments and organisations, such as the Scottish Women's Hospitals (SWH) and Red Cross.

After her husband was killed while enlisted in the Australian Imperial Forces, Mary De Garis joined the SWH as a surgeon and chief medical officer. The SWH provided mobile medical units, staffed by women, to the Allied armies. De Garis was part of the SWH's America Unit tent hospital under the Serbian Army, and the staff nursed Serbian, Russian, Greek, Italian, French and British servicemen.

In 1919 De Garis returned to Melbourne. Awarded the Order of Sava, Third Class from the Serbian government, she was not recognised by Australia.
See full details

Student notes from lectures, School of Medicine, University of Melbourne