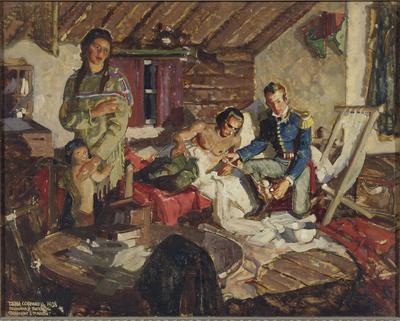 Maker
Mackinac State Historic Parks
Date
2012
Description
In 1938, Wyeth Laboratories commissioned a series of paintings entitled "Pioneers of American Medicine." This painting of 'Beaumont and St. Martin', by Dean Cornwell (1892-1960) is in the Mackinac State Historic Parks Collection. It represents a very famous event in medical history outlined below.
"The wound was received just under the left breast, and supposed, at the time, to have been mortal. A large portion of the side was blown off, the ribs fractured and openings made into the cavities of the chest and abdomen, through which protruded portions of the lungs and stomach, much lacerated and burnt, exhibiting altogether an appalling and hopeless case. The diaphragm was lacerated and a perforation made directly into the cavity of the stomach, through which breakfast food was escaping.” Beaumont 1834
On 6th June, 1822 Alexis St Martin (1794-1880), a Canadian of French descent, a voyageur for the American Fur Company was accidently wounded by the discharge of a musket. The charge was of powder and duck shot, and at close range producing a severe wound.
A US Army fort was located on Mackinac Island which was a centre for the fur trade with many travellers passing through on their way to other parts of the region. Dr. William Beaumont (1785 – 1853) was the army surgeon As a crowd gathered around the injured man, Beaumont made his way through, then quickly cleaned and dressed the wound, reaching him just a few minutes after the mishap.
After 12 months St Martin had recovered sufficiently to walk about and the wound had healed completely leaving an opening in to the stomach which food and digestive juices flowed. Under Beaumont’s care the orifice was plugged with lint and bandages and in time a valve-like growth of stomach wall prevented the efflux of gastric juice. St Martin married, raised a family, farmed and died at the age of 83.
In 1825 Beaumont commenced a series of experiments with Alexis St Martin and as Beaumont was transferred around the United States he took St Martin with him. From 1825 to 1833, St Martin subjected himself to many experiments often daily or even hourly. Finally in 1834 he decided to withdraw apparently tired of the whole thing. Beaumont paid and supported him throughout this period.
Beaumont’s work with St Martin resulted in major contributions to our understanding of digestion. He showed the presence of hydrochloric acid and mucin as separate secretions of gastric juice, the profound influence of emotions on digestion, variations in digestion of various food stuffs and described the movements of the stomach. Beaumont published a book on his researches in 1835, Experiments and Observations on the Gastric Juice and the Physiology of Digestion by William Beaumont M.D. A copy is in the Medical History Museum collection MHM2015.14.
See full details