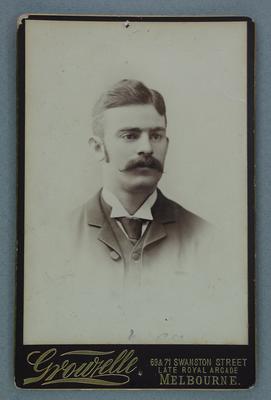 Maker
Grouzelle
Date
1885
Description
Biochemist, General Practitioner and Physician.
"Graduating from the University of Melbourne (M.B., 1885; B.S., 1886) with first-class honours in medicine. Melbourne in 1897, he commenced practice in Collins Street, and was appointed honorary demonstrator and lecturer in clinical biochemistry at the University of Melbourne, a post which he held for twenty-five years. Under Professor (Sir) Charles Martin he trained himself in physiological chemistry and graduated M.D. in 1899"
"Wilkinson became the foremost clinical biochemist in Melbourne, and one of the first to establish a private laboratory. His particular interests were the fractional test meal and the opaque bismuth meal X-ray examination which he introduced with H. M. Hewlett. He was an early advocate of massive doses of iron for anaemia, and popularized the dietary treatment of peptic ulcer and diabetes."
"After seeing insulin used clinically in Canada in September 1922, Wilkinson persuaded the Insulin Committee of the University of Toronto that it should be manufactured under licence by the Commonwealth Serum Laboratories in Melbourne."
See full details